Solar power is a form of renewable energy that is generated from the sun as either thermal or electric energy. Solar energy is most commonly converted into electricity using a photovoltaic solar panel system, also known as a PV system. Solar energy can also be used to heat indoor spaces or liquids, installing solar hot water systems can contribute towards saving on energy costs.

Solar panels are installed on 3 levels: residential, commercial, and utility. Residential panels can be installed at ground level, but most tend to be on rooftops facing south. Commercial solar projects are installed on a larger scale and vary in size and tend to provide energy to businesses. Finally, utility-scale solar projects are the large installations that provide energy to a large number of consumers. There is also a fourth option, community solar, where customers can connect to larger sized solar projects and receive the benefits of solar power without installing anything on their property.

Solar power also has the ability to produce hydrogen by using the energy produced to electrolyse water. This process, known as proton exchange membrane, doesn’t release any carbon dioxide or use fossil fuels, meaning it has a small environmental footprint and huge potential for contributing towards decarbonisation in the future. How do solar panels work?

The photovoltaic effect is when a generation of voltage and electric current occurs in a material due to exposure to light. It was discovered by Edmond Becquerel in 1839 and is the science behind generating electricity using solar panels. Panels are made up of solar cells, metal frame, glass casing and wiring to transfer the electric current. These cells are usually made of silicon, which has conductive properties, allowing it to convert sunlight into electricity. When light hits a silicon cell, it causes the electrons to be put into motion which generates an electric current, this is the photovoltaic effect.

The 4 steps of how solar panels work are: 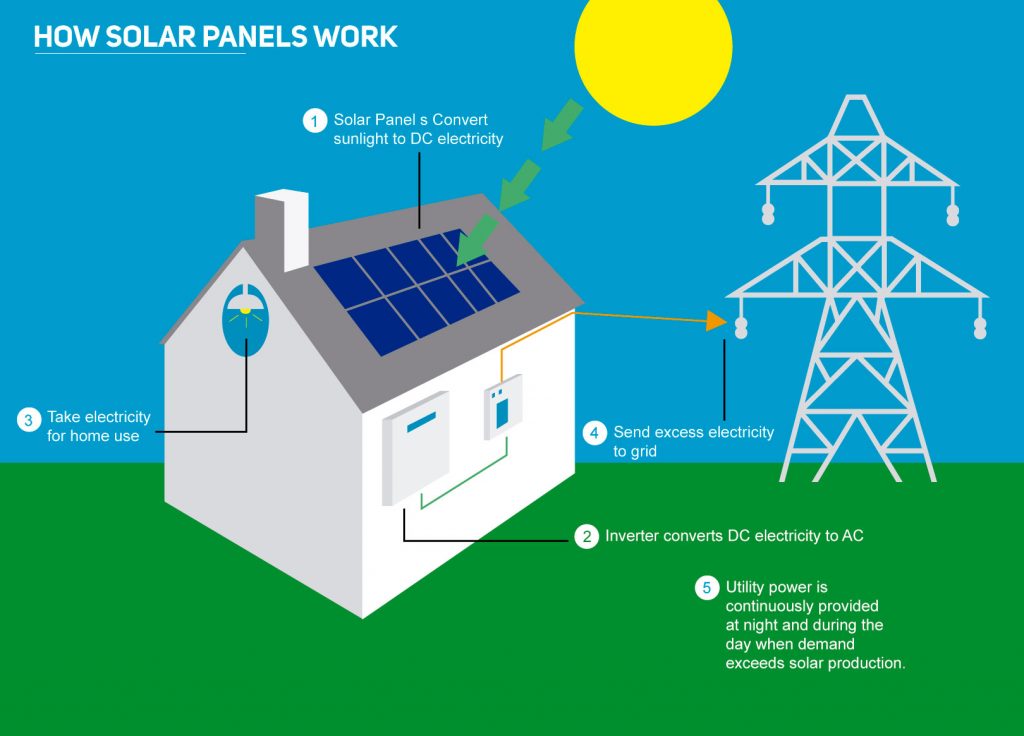 There are alternatives to solar technology that work in different ways to photovoltaic solar. Solar hot water systems use thermal energy from the sun to heat the water in your home. The panels, known as collectors, transform sunlight into heat and are typically installed on rooftops. Where photovoltaic panels generate electricity, these generate heat using an absorber plate which is then transferred to a ‘transfer fluid’. Concentrated solar power is the other option. It is similar to solar hot water systems in that it turns sunlight into heat but does so using mirrors to reflect light to a focal point. This heat is then converted into steam and used to propel a turbine that produces electrical power.

The future of solar power

The cost of solar power has steadily fallen over the past decade and is expected to continue to do so. With constant technological developments and production innovations, the efficiency of solar energy will be continuously improving, making it unbeatable compared to fossil fuels. The sun provides more energy to Earth’s surface than we will ever need and driving research into this area of renewable energy means solar power has the potential to become a major source of energy in the future.

If you're looking to recruit or for work in solar power, get in touch with our Environmental team!