Bioenergy is a form of renewable energy that uses biomass to produce heat, electricity, and fuels. It is one of, if not the, leading source of renewable energy. It falls into 2 main categories, traditional and modern. Traditional bioenergy refers to biomass that is used directly for energy, this includes materials such as wood, waste materials, and food crops. These materials are used solely for their energy production, typically being burned to generate heat which is transformed into energy. Modern bioenergy refers to biomass that comes from waste residues or created as a by-product of other processes which is then utilised to generate energy. Currently, bioenergy provides around 10% of the world’s energy and is the most used renewable source of energy.

Biomass is derived from animals, natural materials, and microorganisms. It consists of organic, animal, or vegetable matter that is considered biodegradable and is utilised as fuel to generate heat or electricity. Biomass is an extremely versatile, renewable source of energy. It can be converted to liquids and used for transportation fuels or used for biogas (methane) which is then burned to generate electricity or injected into the national gas supply.

Its renewable status depends on the way biomass is extracted or produced and its regrowth. Sometimes it can be damaging, for example the use of woody biomass was considered carbon neutral as it consumed and released the same amount of carbon, however the effects of deforestation on climate change have since created a cause for concern. Bioenergy is still considered to be climate friendly when done correctly.

Microalgae are a particularly promising source of energy due to the high number of them as well as their evolved ability to produce and store energy in the form of oil, which they do better than any other natural or engineered process.

Woody biomass has been used for centuries for cooking and heating purposes, trees and bushes are still used in developing countries across the world. It can be argued that traditional bioenergy is not sustainable, particularly with the current levels of deforestation and human consumption of natural resources, however as the carbon levels from burning woody biomass remain neutral it is seen as a safer and more environmentally sound. Nowadays most deforestation occurs for manufacturing purposes however unusable or leftover material is used for bioenergy. 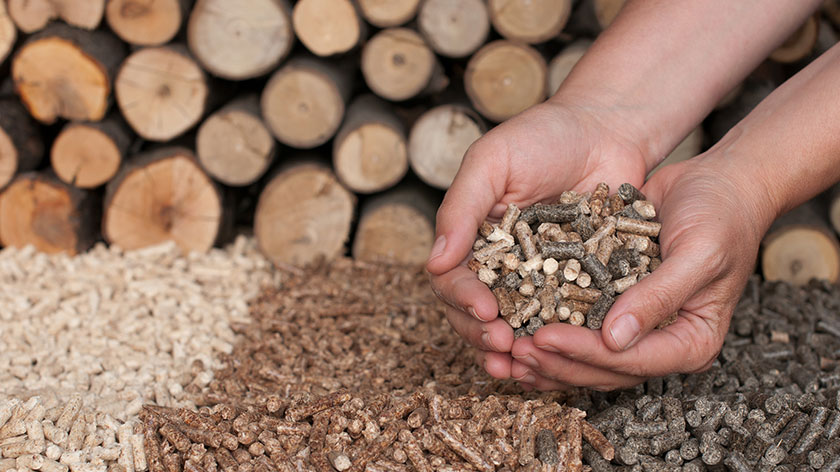 Liquid biofuels are mostly used for transportation and are a renewable alternative to gasoline, the most common of which are ethanol and biodiesel. Hydrocarbon biofuels are a substitute for petroleum which can be produced from biomass sources and are compatible with all infrastructure and machinery. Demand for biofuels is set to increase with post-pandemic levels of transportation going back to how they were pre-pandemic alongside a continued effort to combat climate change. Biofuel production for non-food-crop feedstocks relies on cooking oils and waste animal fats, given that these are limited sources, new methods of production will need to be developed in order to sustain the level of demand. Although cost of production is double to triple that of fossil fuels, this is set to decrease by at least 27% over the next 10 years.

Biogas primarily consists of methane, with some carbon dioxide and traces of hydrogen sulphide and is produced in an environment that lacks oxygen. A natural, renewable energy source, it is produced from the breakdown of organic matter. It can be used as fuel for transportation or upgraded to natural gas standards and injected back into the national gas supply. The annual amount of food waste produced by the UK could generate 11TWh of biogas, which is enough to heat 830,000 homes. Biogas could be used to fill the gap that solar and wind energy leaves in terms of reliance and availability. Biogas is readily available and is a constant, reliable source of energy. It is a low carbon heat source so could also have a role to play in the decarbonisation of heat, which is needed to reduce UK carbon emissions.

Combustion is the simplest, and most common process for generating energy from biomass. The heat generated from burning products is used for space heating or cooling, heat water, industrial processes, or to produce energy using a steam engine or turbine. Co-generation (combined heat and power) techniques mean that combustion can reach an electrical efficiency of up to 85%. The two main combustion technologies are fixed bed combustion and fluidised bed combustion.

Gasification makes use of the gas that biomass naturally produces, these gases are then extracted and either burned or upgraded. The waste leftover is usually just water and carbon dioxide which is much safer for the environment. Gasification is also the thermochemical transformation of waste feedstocks into a synthesis gas by applying heat, pressure, and oxygen. This gas is then purified to make a ‘pure’ gas that can be used for energy purposes such as electricity, heat or steam, or liquid biofuels. This process works on a number of materials including paper, card, and green waste however is usually used for biomass feedstocks such as wood chips. Gasification produces significantly less greenhouse gas emissions than incineration as well as no toxic waste such as fly ash.

Pyrolysis is the process of thermal decomposition at high temperatures using a catalyst in the absence of oxygen. It is also the first step in combustion and gasification however differs from combustion due to the absence of oxygen. In pyrolysis, materials are transformed into their gaseous components and a liquid (bio-oil), sometimes solids are produced in the form of charcoal or biochar.

The future of bioenergy is uncertain due to the environmental impact associated with it and the availability of land. We will need to use the biomass resources we have to their maximum efficiency and thought must be given to whether the energy and resources used in the production, harvesting, and transportation of biopower are worth it for the energy it produces for us.